Environmental sustainability. It’s a loaded phrase that can mean many things, but for homeowners considering making the switch to solar powered homes, it’s simple. Going solar means cleaner, greener energy production and consumption, lower monthly electricity bills, increased property value, and thousands if not tens of thousands in savings over the life of your rooftop solar system.

Thing is, 2022 is the last year homeowners will be able to get the Fed’s 26% solar ITC (Investment Tax Credit). As “Blue & Green Tomorrow” is reporting, renewable energy in the form of solar panels has never been more popular and widespread, nationwide.

This is largely due to the fact that America’s solar industry has experienced enormous growth over the past decade, with a trajectory that is trending up as we move further into the 2020s. One major contributing factor to solar’s growth: the Federal Government’s ITC, or Investment Tax Credit, which currently stands at 26% for homeowners making the switch to solar.

The Fed’s 26% solar tax credit was extended for the moment, but is still set to expire in 2024 unless the government takes swift action to keep it going for a longer period of time. And 2023? It’s already dropping, down from 26% all the way to 22%, representing a substantial loss for those who wait another year before installing solar.

For most homeowners, if they install solar panels now, the combination of federal and state (and even city) rebates, incentives, and tax credits, can allow you to go solar for zero down. That means no upfront, out of pocket cost at all to get the solar system of your dreams installed on your rooftop. It’s a deal that’s tough to beat, which is why so many homeowners in every state are going solar at a seemingly record pace.

Investing in solar energy also typically spells monthly power bills at around half of what you were paying previously with your legacy, fossil fuel power company. Many of these electric providers are basically monopolies, leaving homeowners with no competitive choices, rising fees, and nowhere to turn. That’s where solar panels come into play…

Solar to the Rescue

The Fed enacted the solar tax credit, also known as the ITC (Investment Tax Credit), in 2006. From that moment on, the solar industry experienced a boom the likes of which it had never seen before.

The trajectory is more than promising, as market experts foresee a solar deployment of 31% by 2025, which is only a few short years away. This means jobs. Lots of them. Not to mention the billions and billions in revenue generated for America’s economy.

Once a homeowner pulls the trigger on their solar project, and the panels are installed, up and running, tax bills shoot down. This is all thanks to that 26% solar tax credit, which applies to your personal income taxes at the end of the fiscal year.

Let’s run an example, just for fun. Taking a solar panel system with a total cost of $10,000, with the 26% ITC, the homeowner is already getting $2,600 back right there. And the costs include everything when it comes to the credit. That means equipment, installation, fees, and sales tax all qualify as eligible expenses when claiming the credit.

Installing your solar panels this year, in 2022? Great! You’re eligible for that 26% credit, done deal. Waiting until next year to get the ball rolling on your solar project? Ouch. You’ll be looking at a drop down to 22% instead of 26% back on your taxes. And in 2024, you can say goodbye to the Fed’s solar tax credit altogether, as it’s set to expire for good.

Want to cash in on this generous credit? Simple. Just have a solar PC system up and running before the end of 2022. The second that solar system is pumping, you’ll be saving big, with most homeowners reporting monthly bills at half of what they were prior to going solar, or even less. Some months you may actually get a zero bill, or even a credit back from the power company for surplus energy produced by your solar panels. Now that’s what we call a major win-win! 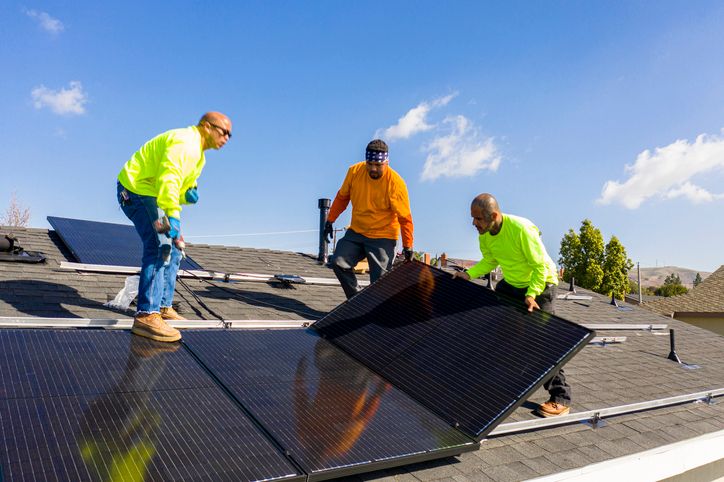